Last night was one of those nights where I just did not know what I wanted for dinner. I walked around the kitchen looking in the cabinet then the freezer then the refrigerator then back to the cabinet starting the cycle over again.  Then something caught my eye, Smoked Paprika. I have been meaning to try this for quite sometime now. It was getting late so I did not have much time to make anything that was time consuming and I knew eggs could be fast.

Smoked Paprika had to go well on soft-boiled eggs but there is only one way to find out and that’s to try it of course. Soft-boiled eggs are easy to cook only requiring a pot with water that covers about half way up the eggs then boil with the lid on for 6 1/2 minutes. When times up fill the pot with cold water and let sit a few minutes letting the eggs cool so you can handle them and they will be easier to peel. Peel on a paper towel but be careful as these are soft-boiled after all and you don’t want to lose that golden goodness before you plate it.

As for building I went simple by just toasting wheat bread then topping with american cheese followed by the soft-boiled egg splitting it. Spice it up with a dash of kosher salt and of course the Smoked Paprika. 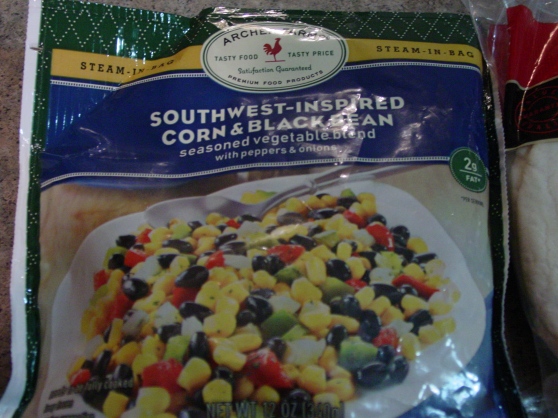 I found a Southwest-Inspired Corn & Black Bean blend at the store which got me thinking that this would go great with tacos.  I was thinking breakfast tacos but I wanted this for dinner so I went with a spicier flavor.

This is an easy meal and only requires a few ingredients.

While doing the steps below start cooking the Southwest-Inspired Corn & Black Bean blend.

Cook the egg. What I found best for this recipe is a lightly scrabbled egg. Crack the egg and put is on the skillet as you would if you are going to prepare a fried egg. Cook until the white of the egg is nearly cooked  then scramble the egg on the pan. Remove the egg while it is still light and fluffy.

Now you have to warm up the tortillas or they will just break apart when you try to build and eat them. A quick and easy way is to use the warm pan you just cooked the eggs in. Warm each side of the tortilla for about 30 seconds each side and when side 2 is up put the cheese on the tortilla while still in the pan to start melting it.

Now for the building stage. Remove the cheese topped tortilla from the pan and put it on your serving plate. Add the egg followed by the  Southwest blend and finally the slice of bacon. Now wrap it up and add the side of choice if desired.

And the final result with a side of smashed potatoes. This was very tasty! 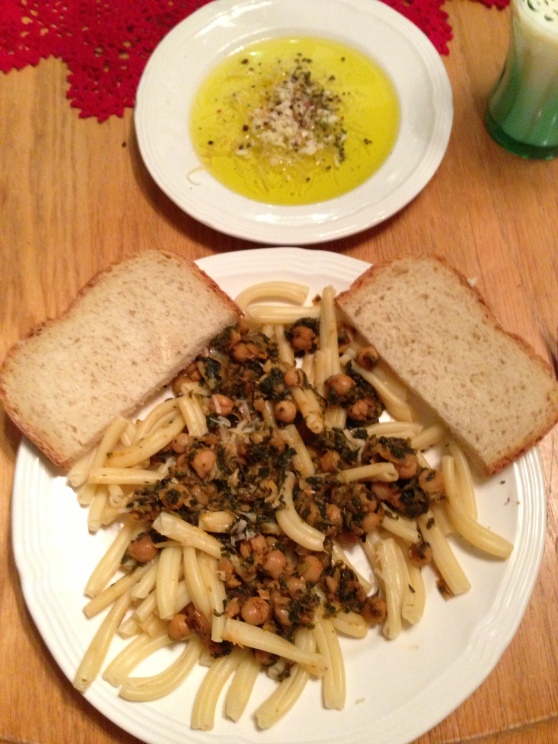 Oh yes! Leftovers can be good!

I had leftovers from the “Chicken with Chick Peas and Spinach” dinner and wanted to come up with something different then the original meal. I thought (after input from a friend) that this would go great on pasta. I had some World Market® Strozzapreti Pasta in the cabinet just waiting to be used.  So in the boiling water the pasta went per the directions on the package. Once the pasta was done and drained I re-heated the Chick Peas and Spinach then combined theses, could be separate  meals, into a fabulous tasting dish.

More then just the main dish was needed! What better then homemade French bread! This was cooked by my 12 year old son all by himself. It came out perfect! Of course dipping the French bread into a plate of olive oil with garlic, Parmesan cheese, basal, fresh ground pepper and a splash of red wine vinegar is a must.

I love pizza and so does my entire family but I did not want the white crust, I wanted wheat. So without further delay come along for the adventure.

I am not sure if this is cheating or not but I had the bread machine make the dough for me. I also used the recipe from the book that came with the machine. After the finishing beep I walked over to the machine pulled out the container and dumped it on a floured surface. I kneaded it for about a minute, formed a tight ball then waited for 15 minutes. 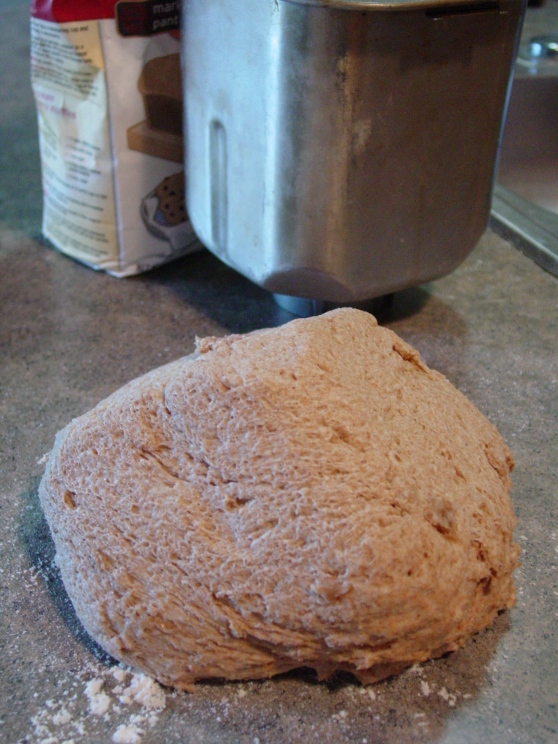 After the wait it’s time to roll the dough. Because I made a double batch I partially split the dough ball with a  dough slicer. My end result will be a large and small pizza. 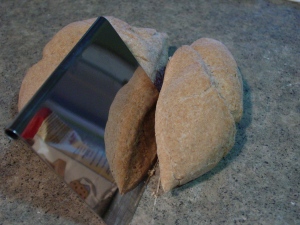 On a floured surface, hands and rolling pin start rolling from the center of the dough ball in all directions. Keep doing this until you have a nice round flat shape that is a few inches larger then the iron skillet you plan on using. What I do to find the proper size is just put the iron skillet on top of the rolled dough. 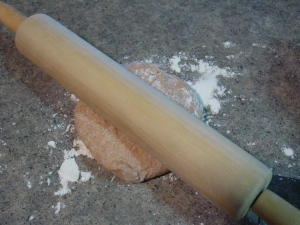 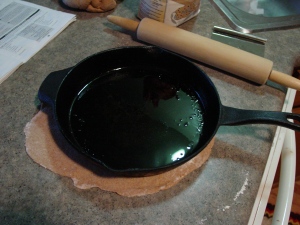 Now it’s time for the crust to rise in a warm place for 20 to 25 minutes. What I like to do is turn on the oven to the lowest setting and once the oven reaches the temperature I turn it off and put it in the oven to rise.

Next up remove the skillet with risen dough from the oven and preheat the oven to 450 F.

Time for the toppings! I start with store bought sauce but you can of course make your own which is much better BTW. You don’t want to much sauce or to little.

Now for the rest of the toppings. This time around I am using pepperoni, leftover steak burgers I made the other day that I sliced up, and black forest  ham. Then add that grated mozzarella cheese but not too much as you don’t want your pizza to heavy. Then top again with just a bit more pepperoni and some dried oregano.

Here is a very important part. Put the pizza on the stove and cook on high for a few minutes. Yes the stove. This will help heat up that heavy iron skillet and help brown the bottom of the pizza. Now you can put it in the oven and let it cook until the cheese is a golden bubbling brown. I would start with ten minutes then check it every minute or two after that. 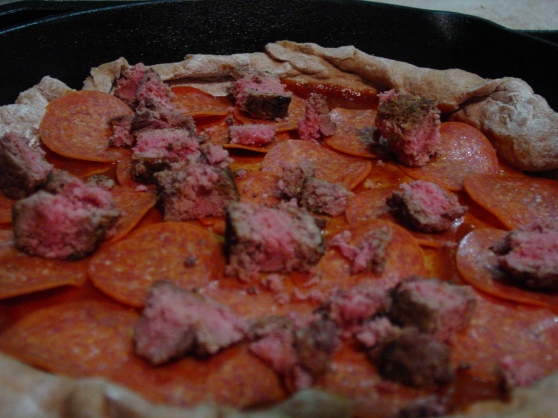 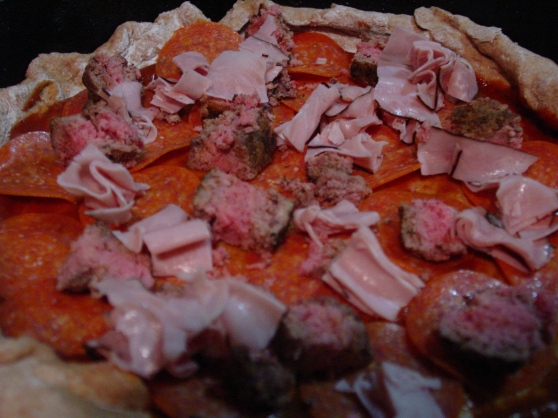 When it’s done take it out of the oven and let it cool down in the skillet for about five minutes before slicing. Oh this looks so good and it was! My family said comments like “Did you call heaven for takeout”. “How do you keep topping your self?” , and “This is amazing!”. 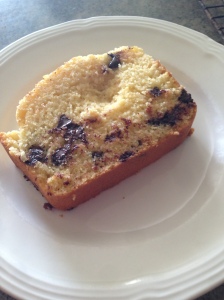 Erik asked me last night, “Daddy can we have something special for breakfast?”. I said sure. So I searched the Internet high and low and found this. It’s corn bread with chocolate chips. Yes I thought the same thing, strange. But after thinking more about it I said hmm this could be good. Well I enjoyed it and my kids “loved it” and gave it a 9 1/2 and also said “this is the best breakfast I ever had”.

I sure can’t take credit for coming up with this gem. Full credit goes to Nick here: http://www.macheesmo.com/2010/11/chocolate-chip-cornbread/

Here are my results from following the recipe:

All nice and toasty 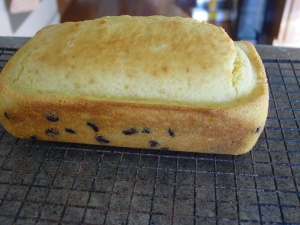 I wanted something different and it had to include the ingredients Spinach and Chick peas as I had leftover homemade chick peas. This had to go with my main dish chicken. This is a simple recipe but  tasty and even healthy. Ingredient list for Spinach and Chick Peas:

In a sauce pan caramelize the onion in olive oil. Add the chick peas, spinach and tomato sauce. Mix well and heat until hot. Add garlic.  Mix in spices a bit at a time tasting and adding more as needed. Don’t over do it on the spices. Now plate your creation topping with Parmesan cheese. 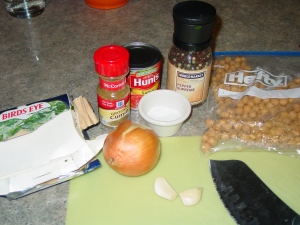 Preheat the oven to 450 F. First up in a small bowl is to blend well the eggs and milk to make an egg wash.  On a plate put the grated Parmesan cheese and bread crumbs. Create your assembly line with the bowl of flour, egg wash, bread crumb blend and finally your baking dish. Now cube the chicken into bite size pieces.  once done cubing coat the chicken pieces with flour to dry. Be sure to remove as much flour as possible. Coat chicken with the egg wash then dive into the bread blend pushing hard to coat the chicken well. Place well coated chicken into your baking dish and top with the melted butter. Bake for about 25 minutes turning once. Be careful when turning as the coating comes of easy. I used a spatula. As for dips youcould use almost anything. I just went with a honey mustard blend with equal parts honey and yellow mustard. 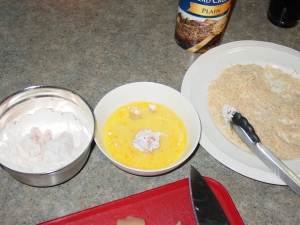 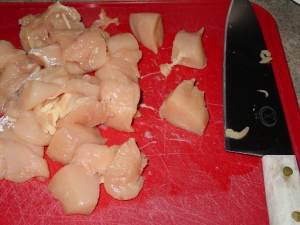 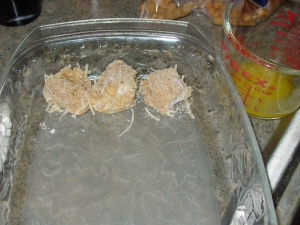 I finally made pretzel rolls for my home ground beef burgers. The burgers are made from grinding cubed Sirloin and Chuck in the food processor with a dash of salt. When I plated the burgers I put mayo on the bottom slice with fresh ground pepper, added the patty then topped with a thick slice of iceberg. As for the chips I used a ribbed slice to give them a better texture , soaked them in water, dried them well then deep fried them in oil until done.

Who knew homemade pretzels rolls were so easy to make. 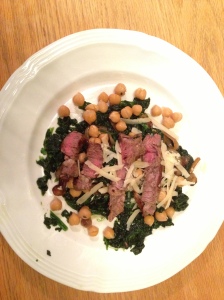 What you can do with leftover steak.

What to do with leftover steak?

This is my own creation with homemade chick peas, leftover sirloin steak, spinach, Parmesan cheese, grilled onions in olive oil with spices which includes salt, pepper and ground cumin.